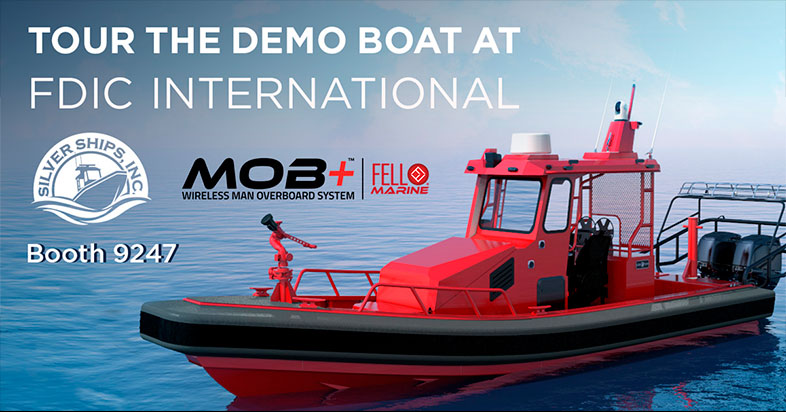 FELL Marine is a Norwegian developer and manufacturer of marine electronics that specializes in wireless safety technology. The company created the MOB+ Wireless Man OverBoard System, an electronically-controlled wireless cut-off switch that adds an extra level safety to all types of boats. Silver Ships’ demo boat is equipped with FELL’s new wireless technology, which provides boat occupants with greater freedom of movement than a traditional kill switch lanyard and stops the engine should a man overboard incident occur.

“We are very excited to be partnering with Silver Ships. We are both in the business of saving lives and having our safety product being used by those in the field saving lives for a living is a great honor.” Said Christian Frost Roeine CEO of FELL Marine. “We believe this will greater enable those in the field to be more effective and safer performing their job.”

The demo boat, a collaboration among Silver Ships, FELL Marine and several other vendors, is outfitted for firefighting, dewatering sinking boats, providing medical treatment, evacuations and search and rescue operations. The vessel showcases the craftsmanship of both Silver Ships and FELL Marine and how each participating vendors’ parts enhance the vessel’s capabilities.

“We are pleased to collaborate with FELL Marine on the demo boat project. Their unobtrusive wireless kill switch technology works very well for fire/rescue applications,” said Steven Clarke, co-owner of Silver Ships. “Our fire/rescue vessels are built to perform at a high level while keeping the crew and passengers safe, and FELL Marine’s equipment helps us accomplish that goal.”

The demo boat will debut April 23, 2018 at  FDIC International in Indianapolis, exhibition booth 9247, where conference attendees can tour the vessel. It will also be at the SEAFC Annual Leadership Conference in Montgomery, Ala. June 25 – 29. Throughout the year, Silver Ships will transport the demo boat and make multiple stops at trade shows and customers’ headquarters for customer interaction and test drive opportunities.

FELL is a leading Norwegian and US localized developer and manufacturer of advanced wireless electronics for the marine industry. FELL develops proprietary wireless systems such as WiMEA. FELL is a world leader in wireless technology for secure wireless data transmission and wireless security systems. The MOB+ Wireless Man Overboard System is developed with the WiMEA platform and is today the leading MOB cut-off device, being used by recreational boaters, OEMs, law enforcement and in other commercial applications worldwide. FELL Marine Inc. and FELL Technology AS are subsidiaries of FELL Group AS. FELL, FELL Marine, MOB+, xBAND, xTAG, xHUG, xFOB, WiMEA, AutoMOB and UniqueID are trademarks of FELL Technology AS. For more information, visit FELL Marine at www.fellmarine.com

Silver Ships, Inc. produces high-quality aluminum boats for military, federal, state and municipal government as well as commercial applications through collaboration with highly skilled design, engineering and production resources. With corporate headquarters located in Theodore, Ala., Silver Ships’ production facilities are situated on a 25-acre plant site and utilizes state-of-the-art boatbuilding equipment. The company’s vision is to provide customers with a boat designed, built, outfitted and best-suited to meet their operational needs while offering the maximum in crew safety and outstanding performance. Learn more at silverships.com.